The Ministry of Public Administration (MPA) hosted a cocktail party on 4th December 2014 for regional and local participants attending the Third Regional Leadership Symposium of the Caribbean Leadership Project which was held at the Hyatt Regency from 1st – 5th December 2014.

Twenty-four (24) public sector leaders from Antigua & Barbuda, Barbados, Belize, Dominica, Grenada, Guyana, Jamaica, St. Lucia, St. Kitts and Nevis, St. Vincent and the Grenadines, Suriname and Trinidad and Tobago are enrolled in the third cohort of the CLP Leadership Development Programme. At the symposium they reviewed problems of Caribbean Migration, Economic Diversification, Supporting a Regional Knowledge Economy and the Implications of National Debt on Caribbean.

The cocktail event was held at Old Fire Station of the National Library Building and began with Minister of Public Administration the Honourable Carolyn SeepersadBachan extending a warm welcome to the delegates and other invited guests. “Tonight, we are not here for debate or even discussion but to share our joy in being among our friends and neighbours, meeting, mixing, mingling, starting and joining many conversations and in some ways we will begin this evening to create the synergy and positivity which will allow us to inch closer to our stated goals” Minister SeepersadBachan said.

Some 70 persons including Permanent Secretaries, Deputy Permanent Secretaries and Heads of Agencies attended the cocktail event at which local artistes JMC 3veni had participants including Minister Seepersad-Bachan dancing to the music. Guests were also entertained by Shiv Shakti Dance Group and PCS Silver Stars Steel Orchestra while they enjoyed a range of local foods.

The CLP is a seven-year, $20 million (CAD) Project, funded by the Department of Foreign Affairs, Trade and Development, Canada (DFATD) (formerly known as CIDA) to support the leadership and economic development training needs of regional and national public sectors in twelve (12) CARICOM countries. The Project also targets key regional institutions which play a pivotal role in advancing regional integration and economic development. 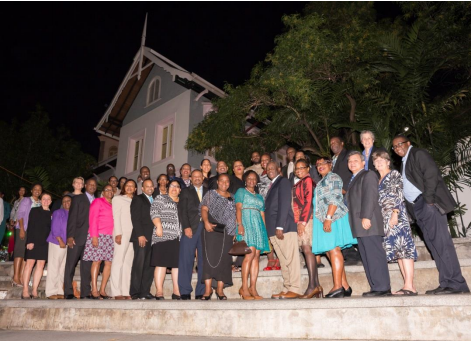