Trinidad and Tobago now has a National ICT plan fastforward 11 which has the potential to change citizens’ lives and transform the economy.
At the official launch of the plan earlier today, Minister of Public Administration and Communications, the Honourable Maxie Cuffie said fastforward 11 is expected to meet the country’s anticipated social and economic needs.

“The World Bank estimates that with every 10 percent increase in Internet speed connections, economic growth increases by 1.3 percent…(the plan) is driven by the needs and priorities of the Government, business, and the people of Trinidad and Tobago…as such, it declares a bold vision to see: empowered people, competitive businesses and transformational government through ICT.”

According to Minister Cuffie, fastforward 11 is also critical to achieving the Ministry’s mandate to bring more Government services online and create a more efficient public service. Key to making this happen is the Government of Trinidad and Tobago Next Generation Network ‘Govnett NG’.

Cabinet approved the issuance of a new, open, public tender via multiple lots of technology and shared services. Govnett NG will replace the aging GovNett 2.0 platform and the tender will be open to both local and international firms. This new tender abandons Lots 1 and 2 of GovNett 3.0 issued in 2014 which had been expected to cost TT$234 million and $43 dollars respectively but which had to be abandoned due to several issues.

“…where the public service delivery of goods and services which impact significantly on the day to day operations of people and businesses are characterized by efficiency, speed and quality far superior to what we currently experience.”

Additionally, fastforward 11 provides the framework as a potential earner of foreign exchange and increased job creation.
“Cabinet has agreed to the establishment of a Tier 111 Data Centre at Tamana InTech Park under an appropriate public private partnership arrangement. The Ministry of Public Administration and Communications has begun the process to engage an experienced consultant to assist in the execution of this major initiative.”

Minister Cuffie believes the plan will play its part in the diversification of the Trinidad and Tobago economy and for information technology to be a catalyst for expanded growth. fastforward 11 covers the period 2017-2021 and is available at http://www.mpac.gov.tt/ for public comment. Formal consultations will begin soon. 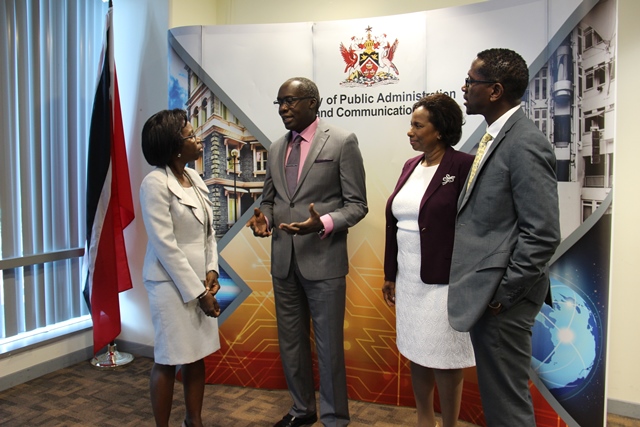 CAPTION
Talking National ICT: (l-r)Chairman of the e-Business Roundtable and member of the NICT Plan Working Group, Glynis Alexander-Tam speaks with Minister of Public Administration and Communications, Maxie Cuffie; Permanent Secretary in the Ministry of Public Administration and Communications, Joan Mendez and Area Representative of the International Telecommunication Union for Caribbean countries.